THE SECRET OF ETERNAL YOUTH

When the first AC 205 all terrain mobile crane unit from the Demag factory in Wallerscheid (Germany), came out in 1994, there was probably no reason to assume that the model would hardly change over the next two decades. It was revolutionary indeed, as it was the very first time that fifty meters length main boom was mounted on a just four axles chassis and its additional seventeen meters boom extension, would allow to work up to 67 meters height under hook. Until then, only higher capacity models, such as the AC 615, could aspire to such a privilege. 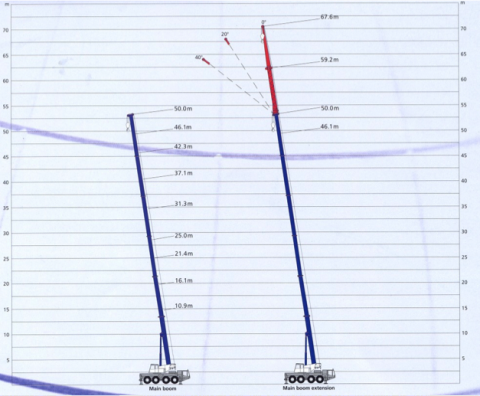 The model that would later be called AC 80-1, was able to lift 80 tons at 3 m radius, with eight tons counterweight, without exceeding 12 t axle load. In addition, the crane was capable of transporting 10 t of additional counterweight (up to 18 t in total), in a configuration of 14 tonnes per axle. Something very useful in some markets like Spain, Portugal, Italy, etc. With that background, it was not just difficult to imagine that some other model from competition could overcome the benefits of AC 80-1, but it seemed also very complicated.

The model underwent a restyling and some modifications in 2002, mainly related to the engine  power and the exhaust emissions (increased a 10% in power and changed to Euromot 2). Nevertheless, the most striking modification was undoubtedly, the introduction of the electro-hydraulic steering, based on the steering of all axles in order of the crane speed, as long as it was been driven below 20 km. per hour. The new variant was renamed AC 80-2 and remained unchanged in production until the end of 2013, when Terex decided to bet on a 100 t model in four axles, mounting a main boom of almost 60 meters.

Therefore, the Demag AC 205 reached 20 years in production, with a few minor modifications and without altering its original structure. This gives an idea of the reliability, cost-effectiveness and longevity of its design and configuration, which has undoubtedly been the best-selling 80 toner all-terrain mobile crane in history.