What the designers of the Demag CC 2800 did not guess in 1998, is that it would undoubtedly be the most successful lattice boom model of the brand, with about 400 units sold. The secret of its success, has surely been its surprising versatility.

The modular boom system of this 600 toner has allowed a large number of combinations, starting from a 84 m heavy duty SH boom and a luffing fly jib of additional 84 m. Thanks to the mast of the Superlift system, a 138 m length SSL / LSL lighter configuration and a 84 + 84 m SWSL (boom + luffer) configuration can be achieved, reaching radii up to 140 m and heights up to 173 m, under hook. 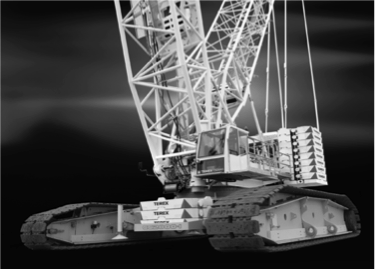 The model underwent a restyling in 2004, happening to be called CC 2800-1. All the loading tables were remarkably reinforced and new equipment and concepts related to the assembly of wind turbines appeared, shortly afterwards. Specifically, a LF2 fixed jib from 12 to 24 m; A S7 reinforced boom kit with up to 4 sections of 12 m each, with a total of 48 m (SGL Max configuration); The Quaddro reinforced traction option and last but not least, the rigging aid jacks for long boom configurations.

The S7 reinforced boom kit and its additional 48 meters length, provided an outstanding support to the assembly of wind generators. The reinforced heavy boom could reach up to 108 m with the Superlift mast assistance (HSSL configuration). In addition, the nacelle of the wind turbines, of around 80 ton weight, could be lifted by a safer and more accurate way. It was just enough to select a main boom length (SH, SH / LH or SSL, depending on the required capacity) equivalent to the hub height and then, mount the 12 m long LF2 jib to save the distance between the body and the boom, with a bigger margin of safety (clearance).

The most striking novelty in the development of the Terex Demag CC 2800-1 life cycle, was surely the launch of the Narrow Track car (NT) in 2006. This new equipment, would allow the crane to share its superstructure with two chassis of different widths: the standard of almost 10 m width and the reduced one, of barely 5m width, suitable for driving the crane along forest tracks, in isolated wind farms, in the mountains.