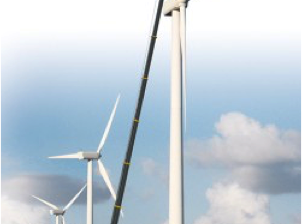 Apart from the first attempts to rig 60 m hub height wind turbines by using telescopic 300 toner (Demag AC 300, for instance), at the beginning of this century, most of the leading role in the installation of wind farms in Europe, ran on the side of the large lattice boom cranes on crawlers.

The inflection point of this trend was led by two telescopic cranes of great capacity: the Terex Demag AC 500-2 and the Liebherr LTM 1500-8.1. The first one, was due to its SSL sideways Superlift system and its luffing fly jib and the second one, due to its 84 m telescopic boom system. 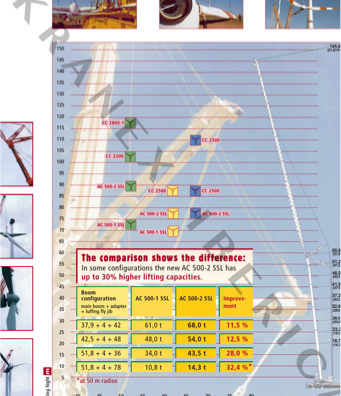 The Terex Demag AC 500-2 is in fact an upgrade of the former version, the AC 500-1, by reinforcing it basically for the assembly of windmills, in 2004. There are points of the load charts where the upgraded model surpassed in something more of a 30% the previous one. From that time on, it could be used for the installation of wind farms. For instance, the crane could already mount a complete Enercom E-66 wind turbine with 85 m of hub height and a 49 ton weight nacelle (divided into two parts), thanks to a 94,5 meter boom + adapter + luffer configuration (42.5 + 4 + 48 m). In the same way, it also came to mount Vestas generators of the V 66 and V 80 models, both at 78 m hub height and 53 and 67 ton weight nacelles, respectively.

The launch of the Liebherr LTM 1500-8.1, with its double telescopic boom system in 2005, was even more surprising. The extraordinary capacity of the 84 m length boom, caused this model was practically the best-selling model of all the cranes of great capacity all over Europe, and maybe worldwide. With just the TY3 bracing boom, it had almost 60 ton net capacity at 15 m radius and 72 m height under hook. For that reason, it would be capable to rise 53 ton weight V66 Vestas nacelles (1.65 MW wind turbines) up to 60 m height, by avoiding to use any auxiliary jib. Thanks to the TY3ENZF fixed jib configuration, the possibilities of assembling other parts like tower sections at bigger heights and radii, growth.

In addition to these precursors of wind turbine assembly, it is noteworthy that in 2004, Eurogrúas in Spain was able to mount a complete wind turbine at 65 m height with a Terex Demag AC 700, by lifting a 52 ton weight nacelle with just a 60 + 12 m main boom + reinforced fixed jib configuration (10º offset).

The panorama changed completely by 2009, with the launch of the biggest telescopic cranes up to date: the Terex Demag AC 1000 and the Liebherr LTM 11200-9.1. Both of them, could then lift wind turbines at 80 m height, by just using their telescopic booms.